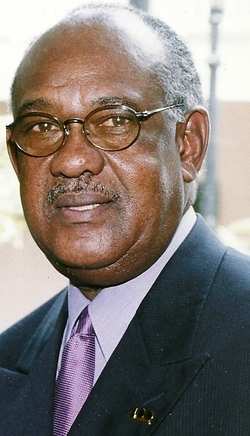 Dave Thomas, retired Special Agent in the SER, passed away January 22, 2015. Dave was the resident agent in Mobile, AL. The following is from his obituary:

David Lee Thomas, Sr. October 21, 1930-January 22, 2015. Shakespeare asked the question, "What's in a name?" To David's family he was called by many names: Daddy, Granddaddy, and Uncle David Lee; to his friends Dave, Big D, and Cuz. Regardless of what you called him, it was understood that he was a loyal, faithful, and dedicated friend. To know David, you knew that his family and friends were the core of his existence. He lived to ensure that he provided the very best that he could of whatever was asked of him. He loved people and loved to engage you in a monologue, not a conversation because he did the majority of the talking.

David was born in Mobile, AL. on October 21, 1930 to the late Nick and Lovie English Thomas. As the sixth child and the youngest son, there was a special place for him. His parents set an example of a building a Christian home and community service. David was baptized as a child at Franklin Street Baptist Church. He attended Mobile County Public Schools and was a member of the first Senior Class of the famed Central High School, 1948. Upon graduation, David enlisted in the United States Army and served during the Korean War. In the Army, he served as a military policeman. It was then he developed a passion and acumen for law enforcement. His fighting spirit was sharpened while serving as a member of the European Boxing Team. Upon his honorable discharge, he attended Hampton University, while working as one of the first Black U.S. Postman in Newport News, Virginia. As a devoted family man, David returned to Mobile to assist with his ailing mother. After returning to Mobile, David began to reacclimate himself to Mobile and met what would become his life partner, soul mate, wife of 52 years and mother of his child. David married Lillian Harris on December 22, 1962. Upon starting this new life, he became employed at Brookley Field Air Force Base. From there, David worked as deputy with the Mobile County Sheriff's Department. David and Lillian were blessed to have a son, David, Jr. Upon the birth of his son, David knew what kind of life he wanted to provide for his family. Thus, David became employed by the U.S. Customs as a Customs Agent and investigator. His most rewarding law enforcement career was being hired as the first Black investigator in the Southeast Region, with the Office of Inspector General, U.S. Department of Agriculture.

David experienced a very rewarding and exciting career with OIG. Two highlights of his career were receiving a letter from President Ronald Reagan, for solving a fraud case which saved the United States Government Ten Million dollars; and investigating and solving a fraud case which resulted in the conviction of Roy Bryant, one of the murders of Emmett Till. David retired from OIG in 1990. Retirement for David lasted all of six months. He began working at the Mobile Drug Coalition, and from there he began the second most rewarding career when he became the Assistant Director of the Mobile County Community Corrections Center. In that role, he established the Court Police Department and helped develop the Mobile County Drug Court program, which was the first of its kind in Alabama. David believed that everyone deserved a second chance. Working from this perspective, David worked to ensure that anyone who wanted to make a quality of life change he would help them. David not only enjoyed helping those who needed his assistance, he also enjoyed the relationships that he built with those with whom he worked.

David loved Mobile and being involved in all aspects of making his city and his community a better place to live. David affiliated himself with many civic and social organizations. He was a very active member of the Mobile County chapter of the Alabama Democratic Conference, NAACP, Toast Masters, Lions Club, Alabama BAEO, East Church St. District Neighborhood Organization, and the 100 Black Men of Greater Mobile; of which he was a member of the Executive Board and chair of the Membership Committee. David loved Mardi Gras, and took great pride and honor in his membership in the Comrades Mystic organization. Continuing the legacy of his father's active work in his church, David served on the Board of Stewards and Finance Committee, Big Zion A.M.E. Zion Church and Board of Deacons, Franklin Street Baptist Church.