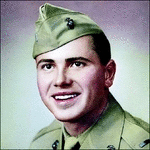 The following is from his obituary in the Wash1ngton Post: