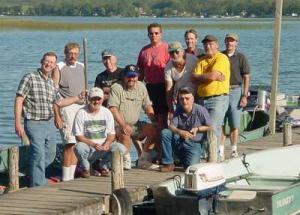 Thirteen hardy souls showed up at various times during the week: 9 retirees, 1 active duty, 1 each from FSIS-Compliance, OIG-SBA and OIG-Labor. We again had national coverage. Both the east and west coasts were represented and we dipped as far south as Texas. Eleven of the 13 were around Monday for this photo op.

We had three cabins this year, including what has become our standard headquarters - "Shoreview." This is a former boathouse that Jon Solinger's grandfather skidded across the lake one winter back in the '50's and converted into a cabin. It is perhaps the largest of Jon's cabins and is ideal for a central congregation point. It is right on the lake and, in fact, one corner hangs over that lake. We try not to stand in that corner. The other cabins were the "Bobolink" next door and the apartment over the store.

The weather was breezy a couple of days, but there was no rain.

The excitement this year consisted mainly of a rod and reel going over the side, a retiree going overboard and a lost set of truck keys (someone who drove from very f-a-r away). We never did retrieve the rod and reel or keys. However, the retiree was safely recovered. The key dilemma was finally resolved by having a spare key UPS'd from home -- the cheapest of alternatives.

Gary prepares to leap into culinary action. Hmm... where did I drop that fish this morning?

The cook getting fresh with the dishwasher.

Rob hunting flies. Lee (on the left) is his spotter.

Greg. Keeping count for Rob. The count probably has something to do with what's in Rob's glass!

Jim with his wheels

Greg and his cards