Six veterans of the Mudfish Rodeos of the 1980's came for the revival. By now five of the six are retired.  Like the first photo says, just like old times, except no one caught a mudfish this year. If you don't know what a mudfish is, it is a prehistoric throwback (and usually thrown back) also known as a "grinnell" or, more accurately, a "bowfin." A mudfish has teeth, is a pain to catch because you don't eat it and it usually tears up your lure and messes up a net bigtime.

Harold, Glenn, Jeff and Kyle.  Four of the six musketeers.  Dean is behind the camera. Just like old times, except older. 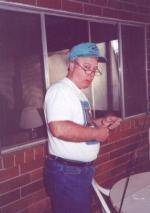 Carl. He had to leave early (He hasn't retired yet!) and missed the group photo-op.

Dean demonstrating that if you hold a minnow close enough to the camera, it will look like a 2 pound crappie

Kyle and Dean trying to depopulate the lake. The fish won.

Jeff and Glenn just having a good time. As usual, if the weather is nice, the fish aren't. It was time to kibitz. The fish sure weren't biting that day. Naturally, it had nothing to do with the skill level of the boat occupants. (Note that I didn't say fishermen.)

Dean's oven toast was a bit on the toasted side. Yes, that's smoke and not a haze on the picture. Dean volunteered to be the chief cook (the rest of us were the bottle washers), so no one dared to complain. No one went away from the trip hungry in spite of this one misstep. To say we ate well is an understatement!

Kyle, Glenn and Dean. Out to get fresh air after breathing the oven toast for breakfast. Kyle's looking for the monster fish he hooked (and lost) last night off the end of the dock.  It was a big 'un!  Yes sir, right there! Too bad there were no witnesses. Yeah, sure, Kyle.