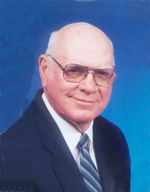 Dick was born in Iowa in December 1930. He lived his earlier years on a farm in Nebraska, and after high school joined the U.S. Navy. Dick retired from the U.S. Army as a Master Sergeant in 1969, after 21 years of military service, which included his four years Navy service, and a tour in Viet Nam.

He came to work for OIG in the Atlanta Regional Office, transferred to Huron, South Dakota, and then to the Bell suboffice in the Los Angeles area. From Bell he went to the regional office in New York as a supervisor, and later transferred to San Francisco, ultimately returning to Huron to finish out his career. He retired in Huron in 1988 and spent several good years fishing, hunting, golfing, and riding his ""big red machine", a Honda Gold Wing motorcycle. Dick loved his toys, his family, his many friends, and Oreo cookies.

Linda Sue, Dick's wife, died of cancer in January 2006. Her cremains, along with Dick's, will be buried in the Black Hills National Cemetery, Sturgis, South Dakota, August 18, 2006. Dick is survived by two sons, Dave, a Phoenix, Arizona police detective, and Richard, a sales manager living in Missouri, and four grandchildren. He also leaves two brothers, a sister, and a lot of friends.

Services for Richard, and his beloved wife of 49 years, Linda S. Wilson who passed away in January 2006, will be held at the Black Hills National Cemetery in Sturgis, South Dakota on August 18, 2006 with full Military Honors. Richard has been cremated and there will be no visitation. Arrangements are with Welter Funeral Home. Richard Crispin Wilson Jr., was born on December 3, 1930 in California Junction, Iowa to Richard and Inez (Smith) Wilson. He grew up on the family farm. He married Linda S. Wilson at Tishao, Mississippi on December 31, 1956. Due to Richard's military career they lived in numerous locations across the United States, finally settling in Huron, South Dakota in 1973.

Richard served with distinction in the United States Navy, and the Untied States Army from 1948 through 1969 retiring with over 21 years of exemplary Military service. Richard served in Vietnam, Korea, and a tour in England. Richard served his country in Vietnam during the Tet offensive as an Intelligence Specialist and Counter Offensive Investigator. Upon retiring from the military in September 1969, Richard continued his commitment to government service as a Criminal Investigator for the U.S. Department of Agriculture. All total Richard spent 40 years of prestigious public service.

Richard was a Mason, and was a member of the Veterans of Foreign Wars, The Elks, and American Legion. He enjoyed traveling, hunting, fishing, and riding his Honda Gold Wing motorcycle.

He was preceded in death by his wife, Linda Sue Wilson; and his parents.

Memorial contributions can be made to the Huron Nursing Home or the Alzheimer's Association in c/o of Pamela Wilson, 709 Zion Way, Nixa, Missouri 65714.

People from South Dakota, Missouri, Arizona, Arkansas, Texas, Colorado, Nebraska and California, all friends and family of Dick and Sue Wilson, gathered at a hotel in Deadwood, South Dakota on the evening of August 17, where all spent the night. The morning of the 18th arrived clad in fog, overcast, and chill. In early afternoon a charter bus picked up the assemblage at the hotel and conveyed it to the Black Hills National Cemetery, near Sturgis, South Dakota, for the interment ceremony. On arrival at the cemetery, the weather had changed to bright sunshine, with temperatures of about 72. Driving into the cemetery we could see approximately 50 U.S. flags snapping in the breeze, all lining a mall-like area beyond the cemetery headquarters building.

Most of us got off the bus at the headquarters, and wandered the grounds for a few minutes while Dick's son, Richard, took care of some details with the cemetery director and the funeral director. We then proceeded into the cemetery by bus, passing under those beautiful snapping flags, and arriving at a small chapel where the group entered. Inside, some sat, some stood. The remains of Dick and Sue were placed in front of the group, hers in a rather ornate urn, his in a simple metal box with his name on it. "Richard C. Wilson, Jr."

A short religious ceremony was held inside the chapel, conducted by a chaplain of the Catholic faith. (I don't believe either Dick or Sue had a religious preference, although Sue was raised a Baptist). An honor guard departed the chapel following the religious portion, and fired their rifle volleys under two flags flying at half staff; the American flag and the South Dakota flag. "Taps" was played, and the two containers were then placed together in a single cube shaped metal vault for burial. Before the vault was sealed, the group filed by, some pausing for a moment, some touching the containers, some just moving slowly past. A lot of tears passed in the process.

Outside again, we followed in a procession to the grave site, where the vault was lowered into the ground, straps removed and pulled out, and workmen shoveled the red South Dakota earth into the hole, tamping it down every other shovelful. The grave was then covered by a floral arrangement of red and white carnations, and after some mingling and chatting, everybody boarded the bus and drove away, leaving Dick and Sue in Section J, grave 303. Theirs was the fourth burial that day, and they join another 19,000 who have preceded them since the cemetery opened in 1948. When the stone is placed, it will have Dick's information on the front of the stone, Sue's on the back of the same stone.

On the way back to the hotel, the bus broke down. Everyone agreed it was something Dick caused. 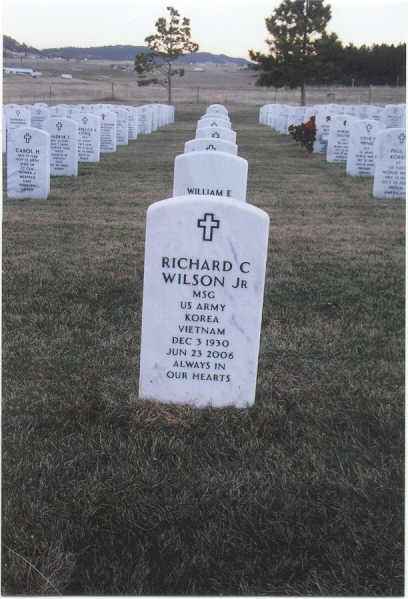