25th Anniversary of the IG Act

On November 19, 2003, OIG commemorated the 25th anniversary of the passage of the Inspector General Act of 1978 with a ceremony at the Agriculture Building. Below are some photos from the affair as well as an article from the USDA News describing the event. A proclamation from the Secretary of Agriculture is also included.

Theodore Haaser speaking at the ceremony 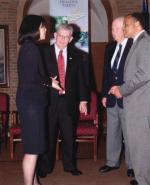 OIG Notes A Milestone In Its History

Actually, USDA's OIG is older than that -- 16 years older, in fact. According to Paula Hayes, assistant inspector general for planning and special projects, it was created in 1962 after an agricultural fraud scheme known as the "Billie Sol Estes scandal," was uncovered. "When OIG was administratively established by then-Secretary Orville Freeman, she pointed out, "it was the first nonmilitary OIG in the federal government."

Ted Haaser, who had just left the Federal Bureau of Investigation at the time, was asked to help set up this "new OIG" at USDA. "So one of my first acts, back in 1962, was to design official credentials for the first auditors and investigators that OIG would soon be transferring or hiring," he recounted. "I designed the credentials to be green, with the USDA seal in gold, on the outside. An authorization statement and official photo would be on the inside."

"I made one set for the Secretary, one for the Under Secretary, and one for the new head of OIG," he continued. "so then I decided I'd make the fourth set for me -- and I did, and its number was 004."

Haaser ultimately served as the assistant inspector general in OIG's [then] Analysis and Evaluation Division until 1967 when he transferred to the U.S. Department of Transportation. He retired from the federal government in 1974 and presently resides in Fredericksburg, Va.

He has the distinction of being the first permanent OIG employee in a non-military office of inspector general in the entire federal government. Brian Haaser, his son, is currently the special agent-in-charge of OIG's Mid-Atlantic region, based in Beltsville, Md.

Sixteen years after USDA's OIG first started to function, the Inspector General Act of 1978 was passes. OIG senior program analyst Marie Harte Sanchez noted that it strengthened OIG's audit and investigative authority, while permanently establishing an OIG at USDA and at a number of other federal departments.

As part of a ceremony held on November 19 at USDA headquarters in Washington, DC, to commemorate the 25th anniversary of the Inspector General Act of 1978, OIG unveiled four banners designed to highlight its history and accomplishments

According to OIG program analyst Eileen Sanchez, the first banner detailed the history of OIG and spotlighted some of its milestones. The remaining three banners depicted examples of actions by OIG employees to reinforce the concepts of program integrity, health and safety, and protection of assets.

"Those are just a sample of some of the things we do," Fong underscored, "as we serve as a bulwark against waste, fraud , and abuse in the delivery of USDA's programs and services to its customers and the American taxpayers." Comparable celebrations are to take place in OIG's seven regional offices around the country.

I am pleased to recognize the Office of Inspector General (OIG) of the United States Department of Agriculture (USDA) as we commemorate the 25th anniversary of the enactment of the Inspector General Act. While OIG of USDA was administratively established in 1962, the Act statutorily established this and other Federal OIG offices and provided Inspectors General with important authorities, duties and reporting requirements.

The OIG performs a critical function through its efforts to prevent and detect waste, fraud, abuse; and to promote economy, efficiency and effectiveness in USDA programs and operations. OIG continues to make enduring contributions to better enable USDA to ensure the safety, security, and integrity of American agriculture. We in USDA are proud of OIG's past work and look forward to the future as we join the rest of the Executive Branch and Congress in recognizing this significant milestone in OIG history.

I commend the professionalism and dedication of OIG employees, and congratulate you all on 25 years of success in performing an important service of the Department and the citizens of this great Nation.