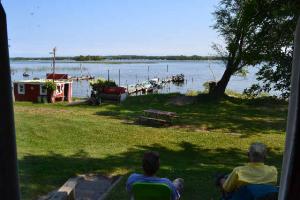 This year the weather was great at Lake Lida, probably the best since the excursion started. No rain, mild temps and little wind. Everyone caught fish, mostly in the 2-3 pound range. Lee Koepping emerged with the big fish prize landing a 5.5 lb. Northern.

Lee Koepping with the 5.5 lb. winner

Luckily no major damage was done at the resort

Ron and another catch

Working on the bill