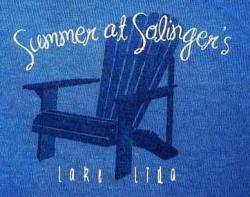 This year was the tenth anniversary of the Lake Lida excursion and eight attended, including Larry Self, a friend of Lee Koepping. Larry was good sport and tolerated all the OIG talk with aplomb. He also managed to walk off with most of our change from the gaming table.

The weather was good again this year, and the fishing was very good with lots of fish caught. (Sounds like just about every other year!) Ron Sidener had the honor of landing the biggest fish of the week, a 5.5 pound northern.

Larry and Lee working the weeds just after sunrise.

Capt. Jim Merrick at the helm.

Jim with a bass. Hey, they're all fun to catch!

Larry Self with a northern.

Lee Koepping with a nice bass.

The view is enough to make you want to get up that early.

Another day, another dollar

Jim Lee and his stringer