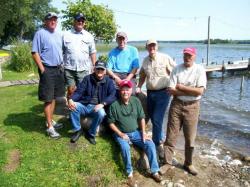 The fishing was slightly different this year in that smallmouth bass abounded in the 2 to 4 pound range. This made for not only good fishing but also good eating. Jim Mendenhall took the big fish pot (again) with a 4 pound Northern, so Gary was happy with that addition to our fish dinner on Tuesday night.

Larry Self with a nice one.

Lee Koepping at the grill.

Larry Self with a Northern.

At the burger joint for lunch

Chef Gary working his magic with the filets on Tuesday night.